ALBION SC's VERY OWN ARI LASSITER DEBUTS AGAINST BARCELONA IN FRONT OF 95,000 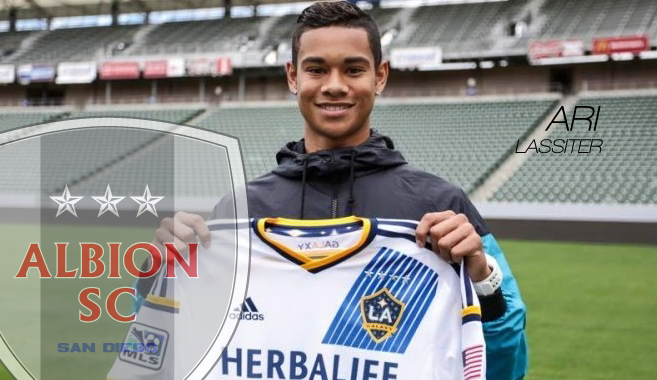 Making The Dream Happen – A Forward on the Rise Ariel Lassiter trained at San Diego’s Albion SC with Noah Gins for over five years – now the son of legendary striker Roy Lassiter, is an Albion-Grown success story. LA Galaxy II announced that the club has finalized the signing of forward Ariel Lassiter. Lassiter will join the club’s roster pending an International Transfer Certificate (ITC) and a physical.  “Ariel is a very talented young attacking player that has a bright future,” LA Galaxy II Head Coach Curt Onalfo said. “We look forward to working with him this season and we are confident he will be an asset to the Galaxy organization for years to come.”  The 20-year-old forward attended Cal Poly San Luis Obispo for one season, where he earned honors on the Big West Conference All Freshman Team, starting in 21 games while scoring five goals and adding four assists. His five goals were second most on the team during the 2014 season.  “We continue to scout and sign players that have the potential to be a part of our first team,” LA Galaxy Technical Director Jovan Kirovski said. “Ariel is a good attacking addition who can help our team going forward.”  In July 2014, Lassiter signed a professional contract with GAIS in Sweden’s second highest division, Superettan, where he scored one goal in 12 appearances for the club. - See more at: http://goalnation.com/la-galaxy-ii-sign-ariel-lassiter/#sthash.13Feoru4.dpuf